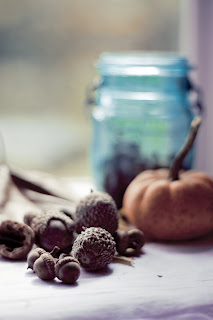 i know you guys are tired of some combination of nuts, pumpkins and glass. hopefully i can go to the fair sometime this week. today it's cooler and i am going to make christina's rustic apple pie in a bit. i think sitting and watching the leaves fall while i peel apples sounds like a perfect past time for a sunday afternoon (the oak leaves make such a beautiful spiral as they float to the ground). later i'm making taco soup (or chili).

last night i went to see 'whip it' with ellen page and drew barrymore. i know the movie was panned by the critics but i really loved it. i think i remember watching a calmer roller derby when i was a child - but this just looked so fun. it also made me remember that marcia gay harden is just a fabulous actress. she is so subtle and nuanced that i adored every scene that she is in. omg - this may be the best thing i've ever made - she is right, the orange zest is just everything.

friday night i saw my itty bitty bit of a niece - i won't be able to call her that much longer - she is getting so big. as she played at the dinner table and ate butterbeans off my plate, my heart was filled with so much love that i could just burst. completely burst...and again when she said 'on the lips' when i kissed her goodnight.

this guy has been hanging out on the front porch for a few days now. i think from the pictures i've searched that he's a golden silk spider and he's definitely an orb weaver as his (her?) web covers the entire front of our bay window. shudder. i've tried getting closer but there are what are called warning webs or anchors in the way. though the bite is not poisonous, it can hurt for a few days. (i'm not going to chance it)

this has been a gift of a weekend. it was predicted to be stormy and ugly - instead we have beautiful, cool and the sunset last night was golden and glorious. hopefully we will have another today. hope your weekend is golden and glorious too.
scribbled by Char