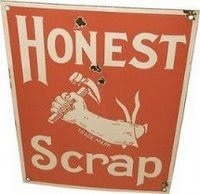 The Honest Scrap Guidelines~
1) Say thanks to the presenter of the award.
2) Share 10 Honest Things about yourself.
3) Present this award to 7 others whose blogs you find brilliant in content and/or design or those who have encouraged you and then inform them of such, of course.

an award from my friend, april. thanks april - you're one of my favorite reads (xoxoxo). she has fab taste in music, photography and adorable hats.

i love this award as it tends to make people dig a bit deeper to find out things about themselves but...after about 18 months on this blog, i'm not sure if i have any old tidbits to share with you all....much less ten. whew. that's a lot when you're counting them down. but i'll give it a go (trying not to bore you completely out of your head). plus, the last post was sort of a downer (but important to share).

10:: i'm a movie nut and though i will go see a chick flick with my friends, the movies that i really love are the sci-fi ones. give me a good sci-fi movie and i'm in heaven. once, i went to a star trek movie by myself and was the only female in the theater.

9:: i have this weird rule where i try not to talk politics or religion on my blog because i've seen too many people get way judgmental about both subjects. i've even lost friendships because people couldn't agree to disagree. however, i will be happy to answer any questions you have as long as you agree that we all have a right to an opinion.

8:: i love pretty panties and back in the day would just randomly buy new ones because i liked the colors or the pattern. conversely, i hate bras and tend to wear two or three favorites all the time.

7:: i do not wear white shoes (except athletic shoes) after labor day or before easter. i know fashion rules have become rather lax about this whole issue and i've tried doing it but it just feels wrong.

6:: i have a horrible habit of nicknaming everyone i know. i think part of that stems from having to live with a nickname almost my entire life. char is the first nickname that i loved - even though everyone else says my family nickname (lanie) is so cute. (ugh)

5:: i'm an avid reader - everything from magazines to textbooks. if it's in this house, i've probably read it at one time or another. as a child, i would take a volume of the encyclopedia and read it like a novel. if i find an author i like, i binge on reading them until i'm glutted.

4:: mean people and rude people really tick me off. not that i think everyone has to wear white gloves and be insipid, nor do i think that white lies are always the best way to go - but i think there is a kind way to deal with most things and wish that everyone could figure that out.

3:: in light of number four, i think people who make jokes that are hurtful and go 'just kidding' really meant what they said and, therefore passive-aggressive behavior like that really ticks me off too.

2:: as i'm typing this out and thinking, jurassic park is on for like the billionth time and i'm watching it. i do that with movies i like and books - watch or read them over and over and over. movies i watch whenever they are on: when harry met sally, jaws, field of dreams, anything alfred hitchcock, and twister. there's probably more but these are the ones that pop in my head. books i've read repeatedly: little women, the secret garden, ten little indians, living a beautiful life, and to kill a mockingbird.

1:: i totally hate shaving my legs. it seems like such a waste of time and effort when i could shave them again the next day. but, i can't stand to see hairy legs either so i guess i would do it regardless - i think it's a plot invented by men as payback for us making them shave their faces.

now:: i think i'm supposed to give this award out to some other people. i forget how many (looks back quickly - seven). i suck at this - that should have been number one. so, i'm going with dani, beth, toni, christina, kate (country girl), cora, cassandra, awww hell. i always feel sort of hurt when i don't get included - so, here's the deal - this is the part of awards that i really hate, the naming of some and not naming some others. i think everyone i read is pretty fab and i'm always interested in new stuff about them. if you want to play along - go for it. if you don't like awards and think this is way too long - all good, no worries.
scribbled by Char