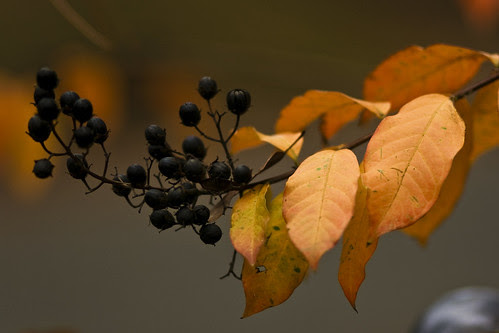 yellow leaves clinging on to my frail little crepe myrtle. my last little bit of fall color. they have fought valiantly against the wind and rain this week, but i think by this weekend they will be gone. the oak tree has steadily dropped tons of leaves on the front yard, a carpet of russet and brown. next door, the camellias have started blooming.

i've erased at least five paragraphs that followed that opening paragraph. words haven't come easy today. i think about writers like hemingway who could say so much in six little words or marquez who took forever to express his intricate thoughts. (many years later, as he faced the firing squad, colonel aureliano buendía was to remember that distant afternoon when his father took him to discover ice.) how is it that those writers can so capture me?

hemingway later told one of my favorite writers, fitzgerald, that he wrote one good page for every 90 pages of crap (paraphrased there) and that his goal was to put the 90 pages in the garbage. in reading, 'the sun also rises' - i wonder how many pages he discarded to get the sheer beauty of that book.

so back to the question of ice...how many paragraphs do i need to discard to get where i want to be? mostly likely my answer is that i didn't have a clear idea of what i wanted to write today. and that is the way it is most days. i open a blank page and words sometime tumble out easily. not so much today. part if it is due to a lack of sleep - don't you really hate it when the weather forecasters predict really bad weather? then everyone is nervous and uptight - my brother made me swear to keep my phone by the bed in case he needed to call me to tell me to go to the basement. (maybe we've watched twister once or twice) so i kept waking up all night long thinking i heard tornado sirens (i didn't)

i think i'm on the trail of someone to teach me knitting and/or crochet. i think i would be better at knitting. crochet seems rather mysterious and confusing from what i've watched. all that looping and switching and....dropping and...what all else that needle does. i think i'm officially too blind to keep sewing with a needle - last night it took me ten minutes to thread a needle. (note to self - go buy a self threader)

i've been on a recipe hunt again - i tend to make things over and over until i'm sick of them (once i master it, that is). so lately i've worn out spaghetti, chili and beef stew. i'm going to dive into those great meatloaf recipes you all gave me and let you know how it turns out. i feel a cooking urge coming on.

since i've proved that i'm no hemingway, i'll leave you with a couple of thoughts from other writers that say it better than me...

"twenty years from now you will be more disappointed by the things that you didn't do than by the ones you did do. so throw off the bowlines. sail away from the safe harbor. catch the trade winds in your sails. explore. dream. discover."
— mark twain

"i wanted a perfect ending. now i've learned, the hard way, that some poems don't rhyme, and some stories don't have a clear beginning, middle, and end. life is about not knowing, having to change, taking the moment and making the best of it, without knowing what's going to happen next. delicious ambiguity."
— gilda radner
scribbled by Char