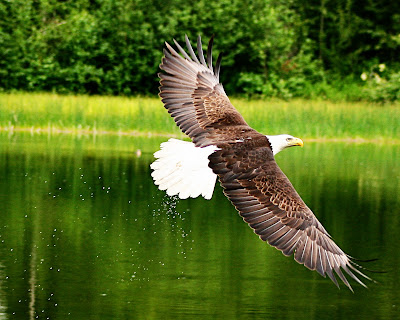 this shot was taken by my brother during his alaska vacation.  what he didn't know while he was fishing for rainbow trout that this eagle was perched about 15 feet over his head. one of the guys let a small trout off the hook and as he threw it back, the eagle swooped in to take the fish.

he never could get a shot of the fish in the eagle's talons, as the eagle continued to "fish" after the guys stood to watch him.

but wow...i love this shot.  this shot says "freedom" and "majesty" to me.  it's powerful.

i hope you all had a great weekend.  i spent saturday drinking in the beauty of the book "to kill a mockingbird" as it was the 50th anniversary of its publication.  i will upload some shots of the courthouse tonight where we sat, just like scout, in the balcony.  we listened as various people read from the book and the words washed over me.  the sadness, the humor, the truth - all of it through scout's eyes.  after - we could meet the woman that played scout in the movies - even now you can "see" scout in her.  as we left, we asked for directions to a local restaurant and was directed to a catfish house.  we 'just missed' harper lee having lunch earlier in the day...
scribbled by Char