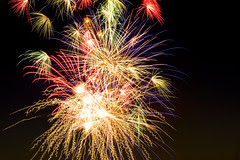 Originally uploaded by CharlaneG
it was the sort of weekend that just wasn't going right.  no big things (until sunday night) just a series of things that just didn't quite work.  it started saturday night when i got dressed up to go with the girls to the re-opened marina bar.  it was fun...until the band started...and they started with pink floyd.  now, don't get me wrong - pink floyd is brilliant...but not so much for a fun outing with a group of girls that were looking for a party.  obviously the new owner's haven't quite married the band to the crowd to the venue.  but...i got dairy queen ice cream on the way home, it wasn't all bad.

sunday is a beautiful day.  i went out and about for a while - picked up lunch and visited with my sister.  then my brother and i decided to head downtown for the fireworks.  i decided i really wanted to make a big effort to do them right this year.  so...we headed to my parking deck where the security guard (bless her heart - truly) proceeded to hassle most everyone that showed up (besides her friends).  making vehicles turn around and not back into parking spaces (mind you - it was a weekend and holiday).  and she was impossible to understand - i'm not kidding.  then she got mad at me because i was taking up a parking space with my camera and tripod.  we tried to comply with everything but then she overheard my brother talking to a buddy of his where he referenced her and her commands.  she went ballistic (i had tried to tell my brother to be more quiet) and started yelling at him in front of everyone on the deck....well, let's just say it wasn't pretty and i was totally flustered and embarrassed.  the buddy turned out to be the shift commander of the capital police and the buddy heard her yelling over the phone and drove over.  not good.  but...she calmed down and my brother calmed down.

so, i started taking shots and was happy but decided to move back about a foot.  as i moved the tripod, i had forgotten to tighten the knob that holds the plate at the bottom of the camera to the tripod and..yes, my camera went crashing to the hard concrete.  my lens ... well, the f/2.8 100mm isn't built for that kind of jolt.  i'm crossing my fingers that it's only the lens.  that all the camera needed repaired is the battery cover/door.  but last night, i could have destroyed my $2,000 camera and $600 lens....all because i wasn't careful.  and i'm just sick to my stomach.

update!!!  well, the good news is my camera is fine.  all it needed was to pop back on the battery cover door.  the bad news....i no longer have a macro lens.  i'm sick about that, but if i could only choose one, i would choose the camera.  not quite as sick...still just kickin' my own butt. i guess that's why they call them accidents instead of on-purposes.