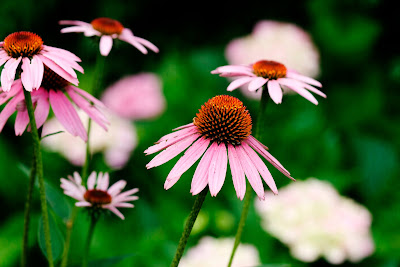 i don't know what to do with myself lately.  i think i lived in so much of a vortex for the last few years that i've forgotten how "normal" feels.  *chuckle*  that drama addiction is sometimes hard to fight, isn't it?  no, that sentence should have a strike through really.  i really avoid drama...but at the same time, now that it is all gone from my life - it feels weird not to have to push it away.  anyway....i think that is another sign that life is good.

i spent the day with the girls yesterday and we had a wonderful time.  we did a few photos but they have both wearied of the camera except for a few candid shots.  i did preen a bit though yesterday when gigi made her a camera so she could take a few pictures.  i also laughed when i took the above shot as both were supervising in some way - from "don't pick the flowers" (i could hear daddy talking) to "why are you taking pictures of flowers".....

the beach as i know it is gone now - i wonder if it will ever be the way that i remember it.  the pristine, blindingly white sand and tons of fresh seafood.  it makes me weep to see the news.  the poor animals, the loss of a income for generations of families....just some rich man can be richer.  i think they should all have to do community service cleaning up the beach - the bp executives, the senate, the house...everyone.  it sickens me.  i'll stop now - i'm sure you all have read it everywhere.

i found a few fun things thrifting this weekend - i will show you later.  as for now i must run those errands that you can't do on weekends - banking and the whatnot.
scribbled by Char