the shots that were published in the brochure last week for those that asked. i've tired taking shots of the brochure, but the paper is so slick (good for advertising) that it doesn't read well so i will wait for the pdf to show you the final product. since the brochure is for a living and shopping development, these shots were to promote individual stores and the restaurant. i learned a lot from this experience and would love to do this again as there are so many additional things i would do.

saturday, i went back to sit with both girls to help get them packed for the beach (i didn't get to go to the beach as planned but will go later this week). they were adorable and funny and so very excited. the afternoon was lazy and slow and all that a rainy saturday should be. although i will say, we have a small pug herd at home as we're babysitting petunia (my other brother's pug) in addition to our two, moses (mo) and lizzie. so cute to watch the little herd gallop to the food dishes and out the front door. 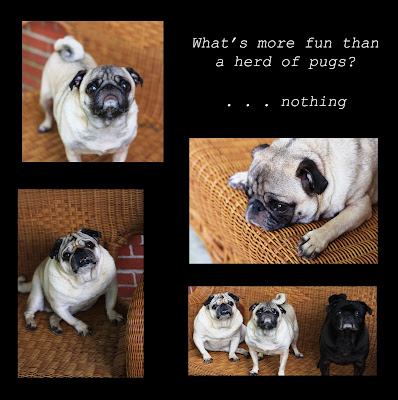 of course, mo and lizzie are always camera ready but petunia hasn't mastered posing yet. give her a couple more days. she's also not really into commands but with her little head resting on my foot or looking up at me begging, i'm willing to overlook a lot. can you imagine how difficult it is to get all three pugs looking at you at the exact same time? yeah...that hard times three. (here is some mosaic monday linky love for my friend, mary.)

and finally, in honor of the true blood season premiere tonight - i made shrimp and grits. it is a recipe from a charleston restaurant but i think it needs a few tweaks before it's camera ready...plus, i'm a really messy cook. hahahahaha and..i so did not have the timing down. but, overall, the recipe was voted a keeper. here are the tweaks i'm planning. the amount of cheese for the grits was rather vague - in my case, i used eight ounces - too much. the grits were too rich and too thick. also, i think next time i will use skim milk instead of whole milk (i didn't say the dish was figure friendly did i?). now, the changes i made, sort of involuntarily: i used dried garlic as i couldn't find the jarred minced garlic at teh market where i buy my wild shrimp. also, i made the mistake of not checking bacon before i went to the market and only had two slices left. so i added some olive oil to the recipe.

bring two tablespoons butter, milk, salt, hot sauce, garlic and five cups water to a boil in a medium size dutch over over medium-high heat. gradually whisk in grits and bring to a boil again. reduce heat to medium-low and simmer, stirring occasionally, one and one-half hours or until thickened. stir in cheese and remaining two tablespoons butter until melted. serve immediately.

for dessert: i took the blueberries and blackberries (well, the remaining blackberries) and put them in a boiler, added some water and a lot of sugar and made homemake blueberry compote. too much water, so it was really more like a syrup. bought a pound cake and served the blueberries over the cake and topped with a whipped topping. very yummy.

i'm such a domestic diva. hahaha...or not. as i say, my timing is still off but who cares. the food was good, the company enjoyed the dish and we had a warm and cozy evening with the vampires.
scribbled by Char